Read part 1 to learn English verbs and to know how I tricked Andrew into being my friend. Now adjectives and nouns (definitions are in red; Andrew made the pictures).

Impudent or irreverent, typically in an amusing way.

Andrew told me his secret to score points with Swiss girls:
“I ask them: ‘Bist du behindert?’ It means ‘are you retarded?’ In German.”
I shook my head in disapproval. I probably even did a face palm.
“I can get away with it because I am cheeky, not mean,” he explained. 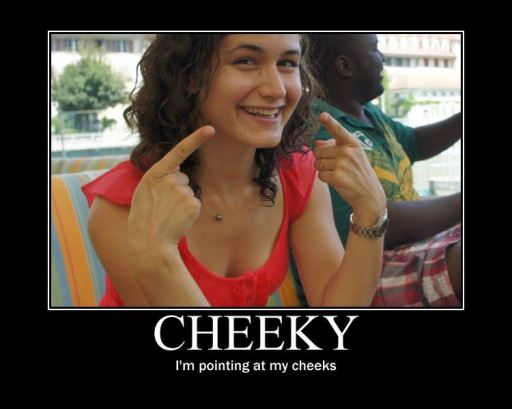 Playful and full of energy (often in a sexual way).

One day, I wanted to introduce Andrew to one of my single students. I sent him a text suggesting we all meet in a bar in Oerlikon. He replied: “Yes, the place is perfect because it’s very close to my flat, in case you or your friend gets frisky. Or ideally both of you.”

Easily persuaded to believe something; credulous.

It didn’t work out between my student and Andrew. So I introduced him to another single lady. We went to a bar and we started talking about tattoos. He said: “I only have one tattoo. It’s on my back. It’s a vampire girl taking a shower. She’s crying. Oh, and she’s a lesbian. How do you know she’s lesbian? Because there’s another vampire girl in the shower with her. It takes up most of my back, actually.”

I believed his story. The following week, he told me: “I use you and the tattoo story as an example to explain the word gullible to my students!” 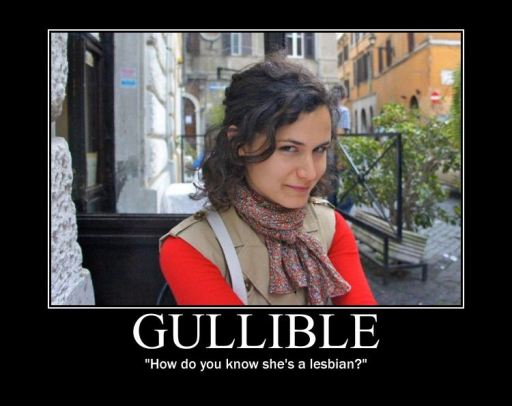 Andrew is writing a children’s book at the moment. He sends me new chapters every once in a while for feedback. Not only is the story amazing, but I also learned a few new words reading it. For example, here:

The tree liked Summergold, and Summergold loved the tree. She loved everything natural and good, and the tree was both, though sometimes cantankerous.

After looking up the word, I understood that the tree was a metaphor for Andrew’s personality. How deep!

Mean adjectives to describe me

Andrew outrageously and repeatedly uses evil adjectives to describe my (poor) self or my behaviour:

As in: “All French women I’ve met are feisty.”

Isn’t that a COMPLIMENT?!

So foolish, unreasonable, or out of place as to be amusing.

Andrew: “What you say is ludicrous.”
Me: “What does ludicrous mean?”
Andrew: “You must know the word, it’s French, isn’t it?”
Me: “No it’s not.”
Andrew: “Yes it is! Something like ludicweuh, ludicwoah?”
Me: “No, those words are not French. The closest French word I can think of is lucratif which means lucrative, is it related?”
Andrew: “No, ludicrous is a synonym for ridiculous.”
Me: “Androo, are you making this word up to make fun of me?”
Andrew: “No! I promise it’s a real word! It’s absolutely ludicrous of you not to believe me!”

Nick: “Why isnt there any story for petulant?”
Me: “I can’t think of any”
Nick: “I can think of a thousand!”

Showing disapproval or contempt towards others.

Me: “I don’t understand why this girl doesn’t like me. I am a nice person!”
Andrew: “It’s probably impossible because you’re French but… have you tried being less snooty?” 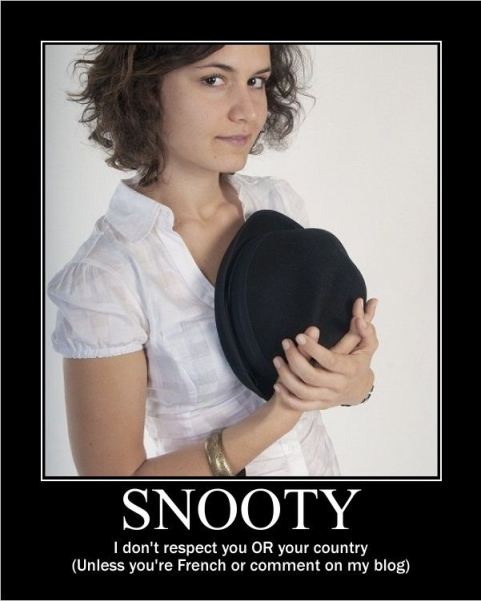 Having or showing an excessive pride in oneself or one’s achievements.

Me talking to Andrew’s friend: “I met my fiancé on the internet only 2 days after I signed up on an online dating website. A year and a half later, he proposed to me.” (Normal smile of happiness).

Andrew: (shaking his head, to his friend) “Look at this smug smile! It’s scandalous how smug she is!” (Ludicrous imitation of my accent and voice): “I met Neek, 2 days later, e was mine, 2 montz later, we were married. Now I ham insufferably zmug.”

Me: “I’ll call you in the morning to check how the date I got you on the internet went.”
Andrew: “NO! You’ll be all jolly and annoying. I can’t stand people in a good mood that early. Wait till lunch.”

A person of unconventional appearance, typically having long hair and wearing beads, associated with a subculture involving a rejection of conventional values and the taking of hallucinogenic drugs. (I don’t take drugs!)

(Of a person) Lazy and disinclined to work: most of them are idle, work-shy, good-for-nothing

Insulting me wasn’t enough for Andrew. He also found a way to bitch at my innocent 13 year old little sister Léa. She had drawn a comic for him. He liked the result, so he commissioned her to do another one. She did it, and it was okay, but needed some changes. I translated Andrew’s demands to Léa. She didn’t feel like working on it anymore. When I told Andrew she wouldn’t change anything, he said: “your little sister is certainly well-prepared for life in the French economy. She’s work-shy like all you French people.” Since then, he regularly complains about Léa and this comic she refused to change for him.

Recently, I started lacking inspiration to write on my blog. I even considered stopping blogging. When I told Andrew about it, he said: “If you stop writing, I’ll make your life hell. You’ll be a quitter, just like your work-shy little sister. I’ll remind you how craven you are every day.”

Sometimes Andrew pisses me off. But then I remember that there are many words left to learn (English language has over a million words). Hopefully, I’ll be able to use some of the words he teaches me to insult him.

What do you think? Cancel reply

I am French but I write in English to have an excuse when I post a lame piece of writing.

Error: Twitter did not respond. Please wait a few minutes and refresh this page.